West Virginia labor law allows tipped employees to be paid a lower cash wage than the standard West Virginia minimum wage by their employers, as up to $6.13 in tips earned per hour can be deducted from their wage as a "Tip Credit". This means that, with the maximum tip credit taken, tipped employees must be paid a cash wage of at least $2.62 per hour, for a total minimum compensation of $8.75 per hour (including tips).

West Virginia does not specify a minimum amount of tips an employee must receive in order to be classified as a "tipped employee". Therefore, any employee who receives tips can be paid according to West Virginia's tipped minimum wage laws.

Employers with six or more employees and state agencies:

Maximum tip credit for tipped employees in West Virginia is 70% of the applicable minimum wage.

It's important to note that while the tip credit allows employers to pay tipped employees significantly less than the prevailing minimum wage in cash, no tipped employee should ever receive actual wages of less than $8.75 per hour. As a general rule, the cash wage received plus any tips should equal at least $8.75 for each hour the tipped employee works.

Let's say Jessica is a dishwasher in West Virginia who receives an hourly wage of $8.75, the West Virginia minimum wage. During an hour long scheduled shift, Jessica receives $7.00 in tips.

For that hour, Jessica's employer can credit $6.13 of the received tips against Jessica's hourly wage of $8.75, so they will only pay $2.62 in cash wages for that hour. However, including both the cash wage and the $7.00 in tips received, Jessica's total earnings are $9.00.

In the next hour of their shift, Jessica receives no tips. Because no tips were received to be credited against the minimum wage, the employer must pay Jessica $8.75 in cash wages for this hour.

In addition to state regulations, tipped employees in West Virginia are subject to a number of Federal labor laws specified under the Fair Labor Standards Act (FLSA).

Most tipped employees in West Virginia will qualify for overtime pay when they work over a certain number of hours in a week. Overtime hours legally pay 1.5 times the employee's normal hourly wage.

The tip-credit system relies on tipped employees accurately reporting all of their tips to their employers, which allows employers to apply tip credits to their wages as well as accurately report their employees' incomes. In practice, employers will often pressure tipped employees to report at least $6.13 in tips per hour, which allows the employer to apply the maximum tip credit to their wages (and therefore pay the lowest legal cash wage).

Tips are subject to both Federal and West Virginia taxation. Unlike wages, where payroll taxes (social security and medicare) are split between the employer and the employee, employees are responsible for paying 100% of the payroll tax on earned tips.

Under Federal law, employers may not make any deductions from an employee's wages (for things such as walk-outs, breakage, or cash register shortages) that will bring that employee's hourly wage below the minimum wage. Thus, for West Virginia employees earning $8.75 (the minimum wage) per hour, no such deductions can be made. 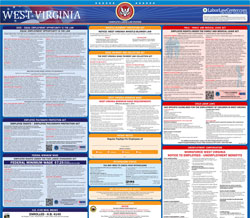